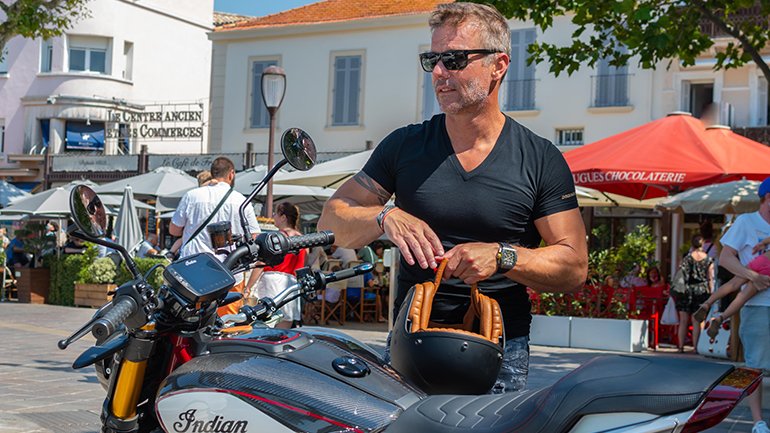 Recently victorious in the unpredictable Rallye Monte-Carlo and second in the Dakar Rally, at the age of 47, Sébastien Loeb has once again shown his high level of competitiveness after having reigned supreme in the World Rally Championship for nine years, he sets records and tries all disciplines: World Touring Car Championship, Pikes Peak, Rallye Cross, Dakar Rally, Xtreme E.

The champion tries and discovers different worlds and each time he shows his exceptional driving qualities. What is less known is that Sébastien Loeb discovered his passion for motorsports on a moped, taking part in regional races and even trying his hand at high-speed motorcycling on race circuits and in enduro.

"We are delighted to collaborate with Sébastien Loeb, who is a charismatic and talented personality. During our meeting, I discovered a real enthusiast, of cars of course, but also of two-wheelers, especially motorcycles with character like the FTR. I am very happy with this new partnership which goes against the grain of Sébastien's traditional universe. Basing this partnership on the Indian FTR is a natural fit, it is a motorcycle with a unique style and performance, everything that Sébastien was looking for in his future motorcycle.” Pierre Audoin – Indian Motorcycle National Manager, France.

The result of a perfect balance between style and performance, the FTR R Carbon is the ideal motorcycle for daily commuting in the week and for leisure at the weekend. Recognisable thanks to its unique lines, riders quickly appreciate its ultra-torquey engine, its great handling, and its premium technology such as Öhlins suspension, Brembo brakes, dynamic traction control or even the three riding modes. Sportiness and character, the ideal motorcycle for a nine-time world champion.

“I am very happy to collaborate with Indian, I am seen more often behind the wheel than the handlebars, but I have always ridden to experience different sensations. I love riding whenever I get the chance, whether on the track or on the road, and the FTR has all the qualities necessary to have fun at any pace. In addition to the motorcycle, the spirit and the universe of Indian Motorcycle are part of a great openness and originality, and that suits me well.” Sébastien Loeb – Indian Motorcycle Ambassador

Indian Motorcycle is America’s first motorcycle company. Founded in 1901, Indian Motorcycle has won the hearts of motorcyclists around the world and earned distinction as one of America’s most legendary and iconic brands through unrivalled racing dominance, engineering prowess and countless innovations and industry firsts. Today that heritage and passion are reignited under new brand stewardship. To learn more, please visit www.indianmotorcycle.eu

INDIAN and INDIAN MOTORCYCLE are registered trademarks of Indian Motorcycle International, LLC. Always wear a helmet, protective clothing and eyewear and insist your passenger does the same.  Ride within the limits of the law and your own abilities. Read, understand, and follow your owner’s manual. Never ride under the influence of drugs or alcohol.

Sébastien Loeb, the man of all motorsport records. Nine-time world champion in the WRC World Rally Championship, reigning supreme by accumulating 80 victories and 120 podiums. His talent was also  expressed in other territories, in the Dakar where he achieved 3 podiums in 2017, 2019 and 2022, in Rally Cross with 2 victories or in Xtreme E where he ranked second in the championship from his first participation with teammate Cristina Gutiérrez.

From snowy roads to dunes, Sébastien keeps this thirst for winning on all terrains. His career was mainly built around the rally disciplines, but he has shown himself to be talented on the circuit achieving a second place at the 24 hours of Le Mans in 2006 and in the World Touring Car Championship where he won no less than 6 victories. In 2013, the Alsatian set the Pikes Peak record which he will keep for 5 years. His latest feat, his victory last January in the Monte Carlo Rally.